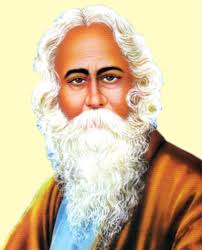 Birth and Early-life: Rabindranath was born on May 7, 1861 in the famous Tagore family of Jorasanko in Calcutta (now Kolkata).


When Rabindranath was a boy, many poets and men of letters used very often to visit the Tagore family. The infant poet was deeply inspired by them. This made up for his want of education in any school or college.

Career and contribution: In 1878, he sailed for England and returned to India a year later. He studied English in Brighton School for some time, and then in the University College of London, during the year of his stay there.

In the meantime, his life as a poet had already begun. Even when he was in his teens, he published nearly seven thousand lines of verse and a vast quantity of prose. Before he was 24, he had established his reputation as a poet and prose writer.

The great Bengali novelist, BankimChandra Chatterjee greatly admired the genius of the young poet. He also edited journals, the Bharati and the Bangadarshan and took part in the foundation of the Bangiya Sahitya Parisad. As he grew older, he wrote innumerable poems and songs, novels and dramas, stories and essays.

During the period between 1901 and 1907, he wrote several good novels, including Gora, one of the greatest novels in Bengali literature.

He married in 1883 and his son Rathindranath was born in 1888. Soon, however, several calamities happened. His wife died in 1902, one of his daughters in 1904, his father in 1905, and his youngest son in 1907. These bereavements are reflected in Kheya, a famous book of poems.

In 1905 came the Partition of Bengal. It deeply stirred the sentiments of the people. Rabindranath threw himself into the anti-partition movement. He inspired his compatriots with the spirit of unity, courage, and hope. Afterwards he left politics.

Nobel Prize: Rabindranath went to England for the third time in 1912. He had translated his famous collection of songs, the Gitanjali, into English and published it in England. This turned the eyes of all the world to Rabindranath. On his return to India in 1913 he was awarded the Nobel Prize in literature, and was knighted (Knight) in the following year. Honors came to him from all parts of the world.

Patriotism: Rabindranath was not only a great poet. He was also a great lover of his country. In 1919 occurred the shameful Jalinwallabag massacre in Amritsar, where innocent men, women and children were killed by the British. Rabindranath immediately gave up his Knighthood. He also prophesied that such brutality was sure to end the British rule in India very soon.

His aim was to combine the cultural ideals of the East and the West. He was as eminent in painting, music, acting and dancing, as in poetry. He took part in his plays and recited his poems with sweetness and charm. Therefore, he introduced the cultivation of different arts in Viswa-Bharati. It has now become a famous Indian University.

His message: The poet toured almost all round the world. Everywhere he received the love and respect of all, the rich and the poor, the high and the low. Wherever he went, people came to him to hear his message of love and hope. He looked like a saint and lived like a saint. Gandhiji regarded him as the greatest master of culture and sanctity, peace and love; so he called the poet his Gurudeva.

His death: Full of glory and honors the poet passed away on August 7, 1941 at his ancestral home in Calcutta (Now Kolkata). His death was mourned all over the world. His centenary has been celebrated throughout India and other Countries in 1961. Many academies and libraries have been established in the name of the immortal Rabindranath to celebrate his birth-centenary.